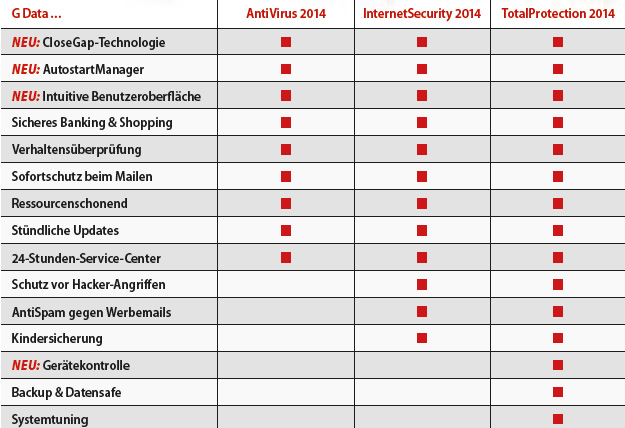 A full-scale security suite contains all the security components you need: antivirus, antispam, firewall, parental control, and some kind of privacy protection. Then there’s what I call a mega-suite—a product that starts with full suite protection and adds more, much more. Backup and system tuneup are typical add-ons. G Data TotalSecurity 2014 is a perfect example, because the security tools it adds are particularly well-designed.

At $49.95 for three licenses, this suite costs just $5 more than the basic G Data InternetSecurity 2014 suite. Its bold, red-themed main window includes the SecurityCenter, Antivirus, Firewall, Parental Control, and Autostart Manager pages found in the basic G Data suite. To these it adds Backup, Tuner, and File safe (encryption). Also present, but not visible in the main window, is an unexpectedly powerful system for controlling use of removable devices. 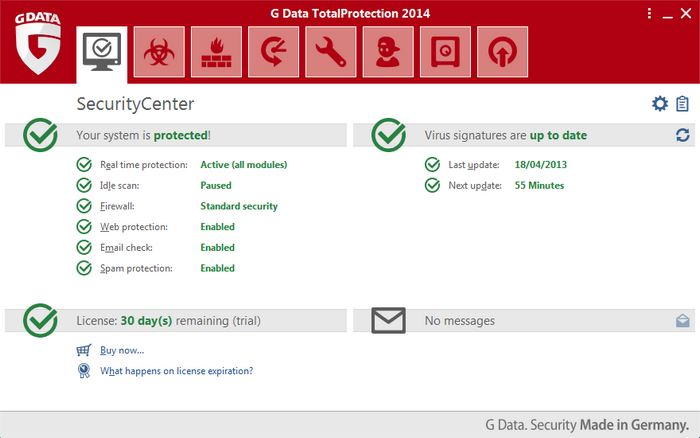 The antivirus component in this suite is exactly the same as G Data AntiVirus 2014; please read that review for full details. I’ll summarize here.

G Data proved quite effective at keeping malware from attacking my clean test system. It wiped out most of my samples on sight and caught a few more when I tried to launch them. It detected 92 percent of the samples and scored 9.2 of 10 possible points. Of products tested with this same malware collection, only Ad-Aware Pro Security 10.5 did better, with 94 percent and 9.2 points. Webroot SecureAnywhere Complete 2013 led the products tested under my previous malware collection, with an impressive 9.9 points.

For full details on how I test an antivirus product’s ability to block malware attacks, see How We Test Malware Blocking.

The article How We Test Malware Removal explains the methodology of my malare removal test.

The independent labs generally give good ratings to G Data’s products. In particular, it earned ADVANCED+ (the top rating) in two tests by AV-Comparatives and ADVANCED in a third. The chart below summarizes recent tests. For background on the labs, see How We Interpret Antivirus Lab Tests

Features Shared with the Antivirus

G Data’s antivirus includes a component that blocks access to malware-hosting websites; it also blocks fraudulent (phishing) websites. G Data TotalSecurity shares this component, which didn’t perform as well as in past years. Its detection rate was a full 38 percentage points lower than Norton’s (Norton being a consistent antiphishing champ), and it lagged 12 percentage points behind the built in SmartScreen Filter in Internet Explorer 8. The article How We Test Antiphishing explains exactly how I obtain very new phishing sites and run this test.

The Autostart manager lets you get working faster by disabling programs from launching at startup or delaying their launch by from one to ten minutes. A similar feature in Norton reports on each startup program’s resource usage, but doesn’t let you choose delay length.

G Data’s firewall defaults to autopilot mode, meaning it makes its own decisions regarding program control. Most users should leave autopilot on and leave the security level slider set to its default value, for effective but unobtrusive protection. The firewall handles exploit attacks and leak tests better than many, and it resisted all port scans and Web-based attacks. However, it does still have a weakness that malicious coders could exploit to disable its security services.

The suite’s spam filter measurably slowed the downloading of email, though you wouldn’t necessarily notice it in a real-world setting. Only 0.2 percent of valid mail got thrown out with the spam, but it let nearly a third of undeniable spam into the Inbox. Norton didn’t discard any valid mail and missed just 5.3 percent of spam. For an explanation of my antispam accuracy test, read How We Test Antispam.

Parental control in this suite is limited to blocking and logging inappropriate websites and controlling each child’s time on the computer and on the Internet. The keyword-based Web content filter often blocks perfectly valid sites, and can easily be defeated by using a secure anonymizing proxy. Don’t rely on G Data for parental control.

A closer look at the backup component in quite a few suites reveals that it’s nothing more than a re-branded version of a service that you could get for free. G Data’s backup is nothing like that. It’s fully integrated and highly configurable. The only minus is that it backs up strictly to local, removable, or network drives; there’s no option for online storage.

Webroot and Trend Micro Titanium Maximum Security 2013 offer online backup only, with 25GB and 5GB of storage respectively. Both can sync files between computers; Trend also allows secure sharing of files from your backup set.

The first step to backing up with G Data is defining a backup job, either for a whole drive or for selected files and folders. Most suites I’ve evaluated include presets to back up important folders like Documents or Desktop; some will find and back up all documents of a specific type regardless of the folder. With G Data you’ll have to make your own choice of which folders to back up. For the backup destination you can choose any local or network drive; you’ll get a warning if you choose a partition on the same physical drive as the files you’re backing up.

A wide-ranging set of options give you full control over the backup. You can choose files to exclude, or balance faster execution against better compression. By default G Data uses Window’s Volume Shadow Copy in order to back up in-use files. If the options seem confusing, you won’t go wrong by just leaving them at their default values.

The Tuner component aims to make your system both speedier and more secure. In addition to making sure the system is configured safely and efficiently, it checks for missing Windows updates, clears useless files and Registry entries, and wipes out traces of browser and computer usage.

Once the Tuner has run its scan, it presents you with a full list of proposed changes. If you wish, you can review the list and un-check any you don’t want. Even after the scan is complete, you can go back and undo any change that had an unwanted result. Trend Micro reports on what its tuner did, but it doesn’t offer the option to pre-approve or undo changes. Webroot removes junk files and traces but also lacks an undo feature.

Bitdefender’s tuneup component is more thorough than most. In addition to deleting junk files, removing Registry errors, and clearing usage history, it can find and remove unnecessary duplicate files. Like G Data it lets you see what it plans to do and also permits undoing any of its changes. G Data and Bitdefender are among the best I’ve seen as far as system tuneup goes.

Quite a few large-scale security suites include a simple encrypted container feature. Typically it appears as an ordinary folder or drive when unlocked, but makes its contents completely inaccessible when locked. Bitdefender, Kaspersky, and McAfee are among those with such a feature, and like G Data they include a secure deletion shredder to prevent forensic recovery of unencrypted originals. Trend Micro goes a bit further, with the ability to remotely seal the encrypted container, in the event the computer is stolen.

None of the suites I’ve seen include the level of access control found in G Data’s File safe feature. You can create as many safes as you want, and protect each with one or more passwords, with varying access levels. The most likely usage would be to create a full-access password for yourself and a password for other users that only grants read-only access.

You can add a name and description for each safe and optionally choose its drive letter. When you do create the password, G Data rates password strength as you type. Like McAfee, G Data lets you create a mobile safe on removable media. This level of access control may be overkill for the ordinary home user, but in a small office (or a shared-computer family) I can see it as quite useful.

G Data’s device control is another feature that’s probably more useful in a small office than in a home setting. It lets you configure rules for USB drives, CD/DVD media, and other removable drives. For CD/DVD and removable drives, you can block access or limit access to read-only, then define exceptions for each user. User-level rules can include a time limit, so, for example, you might set the summer intern’s access to end at the end of summer.

For USB thumb drives, it gets a little more complex. The default action is still to blocking all access, and you can still define user-specific rules. However, there’s also an option to define device-specific rules. You could, for example, block use of thumb drives in general but allow using specific company-supplied drives. That would protect against employees accidentally bringing in a USB-based virus.

I don’t know how much use this feature will get, but in a business setting it could be quite helpful.

I had a bit of trouble running my boot time test on G Data TotalSecurity. My script reboots the system 50 times in a row, measuring the time from when the boot process starts until the system is ready to use. However, after installing G Data I found that the system would not restart without manual intervention. It stuck at “Shutting down” every time.

The results I did manage to accumulate showed more of a slowdown than with G Data InternetSecurity, but the other test results were within a percent or two of the same. On that basis, I determined to simply re-use the previous test results, treating the shutdown problem as a fluke.

Booting the test system took 26 percent longer with G Data running than with no suite. The average slowdown among current suites is 16 percent. Some suites, among them McAfee and Webroot, had no measurable effect on boot time.

A script that measures the time needed to fully load 100 websites took 75 percent longer with G Data’s protection active than with no suite at all. That’s more of an impact than any other current product. The average browser-test slowdown is 16 percent.

On the plus side, a script that moves and copies a huge collection of huge files took just 16 percent longer with G Data’s real-time protection watching, well under the average of 22 percent. Another script that zips and unzips those files took 34 percent longer, though, which is double the current average.

The browsing slowdown worries me; the rest, not so much. For the lowdown on my performance tests see How We Test Security Suites for Performance.

You pay $5 more for G Data TotalSecurity 2014 than for the basic G Data InternetSecurity 2014, and you get a lot for your five bucks. While it doesn’t include online storage, the backup component is full-featured and highly configurable. The system tuner improves your PCs security, performance, and privacy, and it’s more flexible than most. Encrypted file storage and device control both include high-end features that will make this suite extra-useful in a small business setting.

On the flip side, its antivirus damaged some test systems during cleanup, its phishing protection has dropped in accuracy, and its spam filter missed a lot. If this suite’s best features match your specific needs, you might consider using it, especially on systems that are already malware-free. But in general I’d recommend choosing one of our Editors’ Choice mega-suites, either Norton 360 (2013) or Webroot SecureAnywhere Complete 2013.