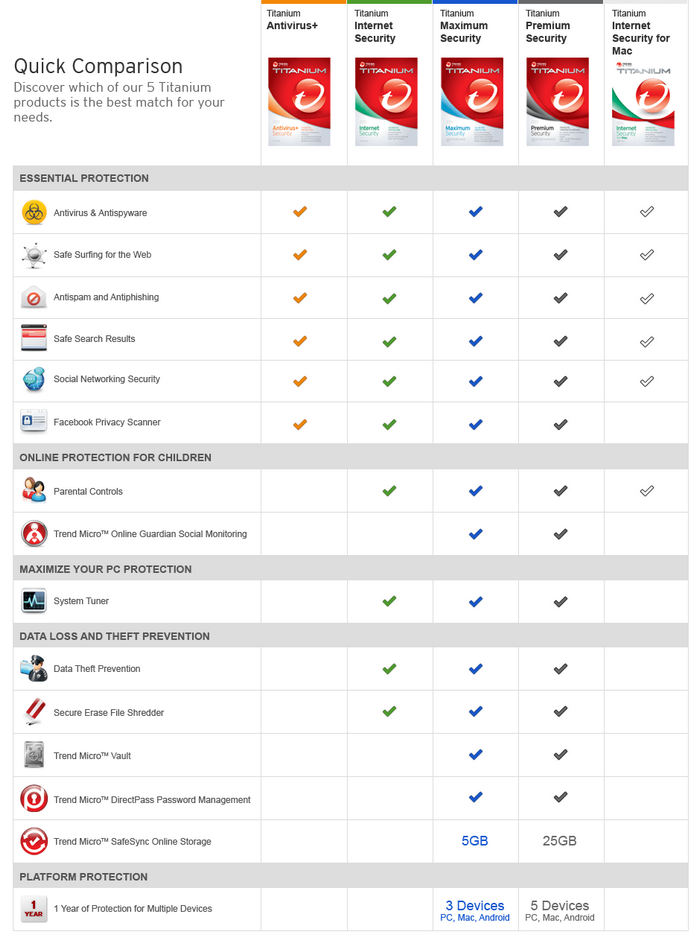 Trend Micro is a company founded in the US and now registered in Hong Kong, but with a major European presence via offices in Germany and Ireland. It has been producing Internet Security software for over 20 years. The 2013 edition of its Titanium product is available in three versions: Antivirus +, Internet Security and Maximum Security, reviewed here.

The Trend Micro Titanium Maximum Security 2013 licence covers three computers and one mobile device and includes 5GB of online storage, which is used for its SafeSync feature for secure backup and data-sharing. There’s also parental control, PC tune-up, social networking protection and password protection, in addition to the core functions of antivirus, anti-phishing, anti-spyware and protection from Trojans and rootkits.

Social networking protection is one interesting aspect. A Trend app scans through your privacy settings in Facebook (always something of an alchemic mystery) and recommends changes to improve your security. It doesn’t make them automatically, so you can tailor what it suggests. The suite also provides guidance on sites you browse to and flags up any dangerous ones it knows about.

The home screen features the usual, big ‘Protected’ logo, assuming everything’s working correctly, and a three-icon bar near the bottom which offers a variety of scan options, a way into the settings screens and a security report.

PC/Mobile subdivides to PC & Internet Security, System Tuner and Rescue Disc, as well as ways to start the Android and Mac facilities that Trend Micro also offers. PC & Internet Security controls virus and spyware protection, Internet and email controls and exception lists, while System Tuner looks at disk space, controlling start-up programs, the condition of the system registry and the privacy of settings for Internet and instant messaging. Performing a tune-up took under a minute on our test system, recovered 35MB of disk space, and removed six unwanted Internet files.

DirectPass is an umbrella system which randomly generates and stores secure passwords each time you need one on your PC or the Internet. They can all be stored in a secure folder on your system or as part of the 5GB of cloud storage included in the product. DirectPass then provides the correct one whenever it’s needed.

As well as providing secure backup, SafeSync enables access from any legitimate device to the data copied from the designated folders and stored in the cloud. The Family tab deals with parental controls.

There’s even a skinning facility, where you can customise the look of the control panel and subsidiary screens. How often most customers access these controls, once they’ve been set, is debatable, but if you want to personalise the look of the software, the facility’s there.

Trend Micro Titanium Maximum Security 2013 has a light system footprint, highlighted by our 30GB AV scan, which it completed in 5 minutes 49 seconds. It targeted 10,428 files for attention, giving it a comparatively slow scan rate of 29.9 files per second. Although the number of files scanned is the lowest we’ve seen, this shouldn’t be seen as a negative result, when the AV-Test protection results are taken into consideration.

Running a 2GB file copy during a full system scan took only three per cent longer than with just AV background tasks running. This is the lowest increase we’ve seen under test and again indicates a very low system footprint.

The specialist, independent test site, AV-Test.org, rates the product at 14.5/18.0. This is a very good score, higher than some better-known products, such as AVG and McAfee and only just missing the top tier, including BitDefender, F-Secure, Kaspersky and Norton.

Splitting down the overall score shows that Trend Micro Titanium Maximum Security 2013 produced a full 6.0/6.0 for Protection against zero-day attacks, scoring a perfect 100 per cent throughout the two months of testing.

Against this excellent result, the Repair score, which measures protection against established malware and the software’s ability to remove malware components and repair changes made to system components, was not so good. Although the suite scored above average in each part of the test, it still only managed 4.0/6.0 overall. Trend says it’s looking into improving this aspect of the package.

The third part of the test, Usability, rated the program at 4.5/6.0. Oddly, AV-Test rated the slowdown of its test PCs at 16, against an average of 10, which doesn’t correspond to the particularly light footprint we saw in our tests. The program only produced one false positive in the two months of testing, so you shouldn’t be troubled by false alarms when running it.